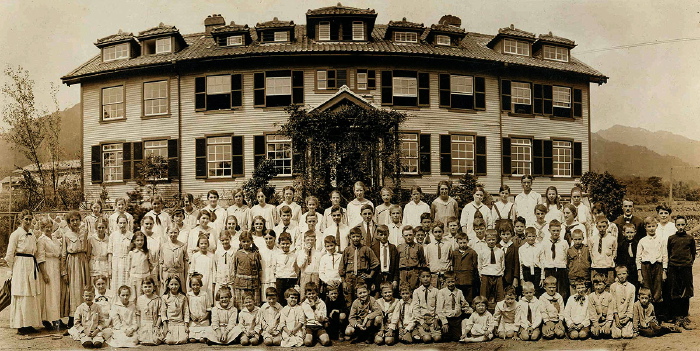 The oldest photo of Canadian Academy taken in 1918

On September 13, 1913, the Canadian Methodist Academy opened with 16 students. Christian mission groups with missionaries in Asia and donors funded our building and operations. In 1917, the Advisory Council, comprised of Christian mission groups whose seats were allocated according to the size of capital grants, was established. At this time, the word Methodist was dropped, and the school became Canadian Academy.

Canadian Academy's mission is to inspire students to inquire, reflect, and choose to compassionately impact the world throughout their lives. We feel that our mission fits our non-profit ethos. Many of the oldest and most-established international schools in Japan and around the globe are non-profit organizations.

Until about twenty years ago, almost all international schools were non-profits. Parents, particularly in non-western countries, would band together and open schools offering a program which allowed their children to return easily to their home country's system. Many international schools, including Canadian Academy got their start in this way. Even today, the French and German governments support national schools abroad for their citizens. Over the last twenty years, thought, most new schools are for-profit schools founded by corporations.

A for-profit school exists to both educate and make a profit for its owner. Over the last 4 years, the number of international schools in Asia offering an English-medium program has increased 30-40% due to the growth of for-profit schools. Today, for example, GEMS Education operates almost 100 schools in 19 countries. Nord Anglia Education and Cognita Schools each run over 50 schools around the world. For-profit schools can expand and change more rapidly than their non-profit counterparts. They can approach a bank for a loan or go public to raise money quickly. They are also able to make major decisions often with little community or staff involvement. In the end, though, they must make a profit for their owners - a profit that comes from tuition fees paid by parents.

Canadian Academy, as a non-profit organization, is a mission-driven organization. We set our mission, accept students, and hire staff to fulfill that mission. The Board of Trustees, the school's primary governing body, hires the Headmaster and has primary fiduciary responsibility. Board members serve without remuneration. Canadian Academy exists not to make a profit for any individual or company, but to serve a mission.

In addition to the Board of Trustees, the school operates with an Advisory Council, as required by law. Representatives from school staff, the Board of Trustees, an alumnus, the PTA and other members of the broader community comprise the Advisory Council. The Council, also serving on a volunteer basis, provides input on the school's budget and operations and meets twice a year.

Our non-profit status exempts us from corporate income taxes, which allow us to dedicate all funds to our educational goals. In Japan, we are a Special Public-Interest Promotion Corporation (ç¹å®å¬çå¢é²æ³äºº). We also benefit from a US-based charity, The Canadian Academy School, Inc., that accepts donations from American citizens and supports the school in various ways. Our non-profit status also enables individuals and organizations who share in the vision of our mission to make donations.

In our second century as a school, we want Canadian Academy to be a vibrant school that lasts long after we are gone. If and when we generate a surplus, we direct 100 percent of this "profit" to further the non-profit purpose of the institution.

Past, current and future students all benefit from the continued support that the community has given to CA. Throughout our history, donors have supported the school. Some examples of this include:

âIn 1920, the school held its first PTA Bazaar, the predecessor of the current annual Food & Fun Fair.
âIn 1928, individual donations enabled the school to purchase the Nagamine Heights campus.
âIn 1934, boys moved into the new dormitory, Gloucester House. Rev. and Mrs. B.B. Chapman donated a substantial financial gift to fund the building project and became the house parents.
âIn 1966, the formal opening of Matsushita Gymnasium honored Konosuke Matsushita, the founder of Panasonic, for his contributions to the school.
âIn 1990, donor support helped to create the Rokko Island campus.
âThanks to our community the Early Learning and Activities Center (ELAC) opened in January 2008.
âDonations and gifts of time continue to create vibrant classrooms ready for present and future students, making our campus an ideal space for teaching, learning, and growing.

Profit-seeking schools pay their Board members and must return a part of tuition fees to their owners. This isn't to say that commercial schools don't care about their families or support their communities. What you can be sure of, though, is that Canadian Academy benefits from its volunteers - Board members, PTA members, and countless others â and that all of your tuition payments are used to support your child's experience.

If you have comments, questions, or suggestions for future subjects, please send them to William Scarborough, Director of Finance and Operations, at wscarborough@canacad.ac.jp. We look forward to hearing from you.